What Were They Thinking?: The ULTIMATE What?

So, the 90's were weird right? Rob Liefeld was a ig thing and that should tell you everything you need to know. But you know what was the weirdest thing that happened in the 90's? Well, we here at What Were They Thinking? (the place where we look at all of the stupidest, most ill-advised things in all of comic book history) think that we have found it:

This guy got his own comic series:

So, bit of background for anyone who doesn't know who that is. That dude is the former Jim Hellwig, who would later legally change his name to Warrior. He was a professional wrestler known as The Ultimate Warrior and he talked like this:

And it turns out, he wrote like that too:

Now, WWF/ WWE producing comics isn't that weird. They still do it. They're not all that good, but at least they're coherant and you can understand what's going on. Now that shouldn't be the benchmark requirements for a comics, but, unfortunately, Warrior falls well short.

Released through Ultimate Creations (which was Warrior's own comic book company), each issue is a mess. Like the mans promo style when he was a wrestler, they are rambling, incoherant and very shouty. They're also drawn by The Sharp Brothers, the guys who did the Star Trek/ Doctor Who crossover comic, as well as a lot of Star Trek comics since 2011 and a Gene Simmons comic, as in the Demon from Kiss (because of course he has a comic). Though apparently this comic was drawn when they were both 15 because the art can best be described as "Rob Liefeld not giving a..."

It is difficult to gauge just how aweful this series is, due to the rarity of the comics themselves (they sold poorly and issue #4 was only released in very small quantities), but I think I can convince you all just by using pages from the Christmas issue, so here we go:

Yup, here he is lifting a car through a wall. Note, he also apparently runs an Orphange. 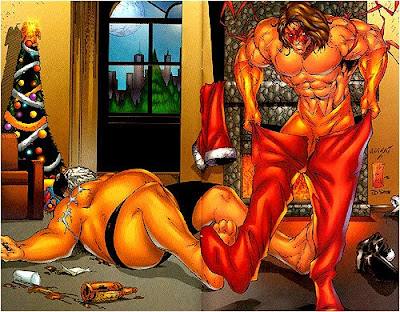 Here's Warrior stealing Santa's pants, which is a very heel thing to do for someone who was exclusively a face.

And now he's got Santa in chains.

And now he's turning a reindeer into the alien from Watchmen. Or maybe he's trying to kill a monster that just killed the reindeer. It's really hard to tell.

I wonder if he got the licence to use that character? 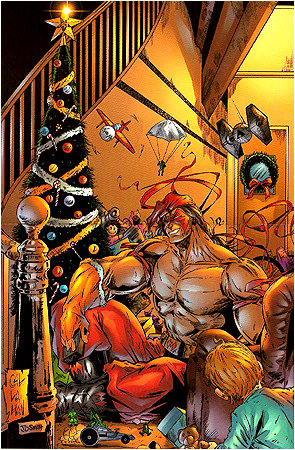 Just what every 8 year old boy wanted under their Chrismas tree in the early 90's, a fully posable Ultimate Warrior Action Figure. Except this was the late 90's, that's no action figure and he just stole Santas pants.

Oh, and btw, Warrior had a co-writer during all of this, someone to help him craft the story. Can you imagine what this would have been like without him (actually I'd love to think that the co-writer was the one who had all the crazy ideas and Warrior was just sitting there like "No, Jim, calm down, I want to write a serious story. No, I'm not going to beat up Santa and steal his pants. You want me to do what to his reindeer?"). 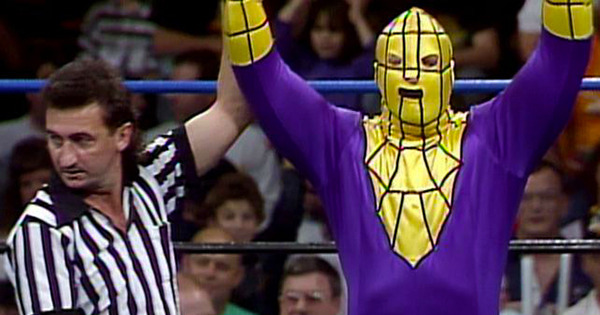 2 Responses to What Were They Thinking?: The ULTIMATE What?