Posted on May 7, 2017 by melmo44 | Comments Off on The Dark Tower Finally Releases a Trailer! 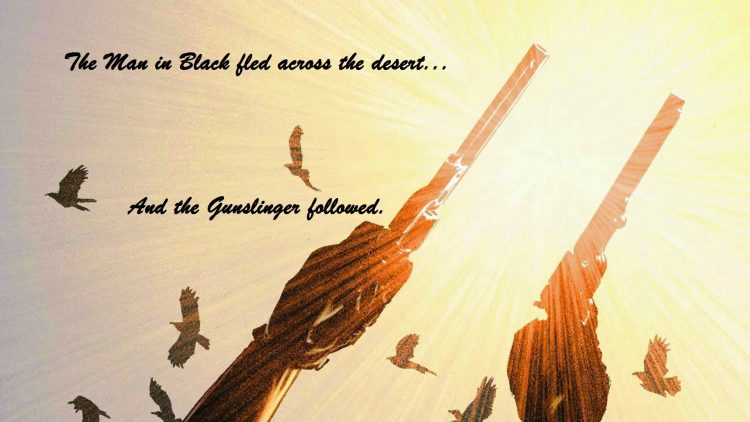 Hey everyone, here with a very special bit of news! The film adaptation of The Dark Tower has finally released a trailer! And of course it had to do so while I was out of town for a couple of days and didn’t have time to do a proper review for it (although a post about what we did while we were gone is also forthcoming…). So now that we’re home again and work is done for the week, let’s check out our first look at The Dark Tower.

We started off with two teasers the day before the trailer dropped that were a kind of lead-in to our protagonist, Roland Deschain, and our antagonist, the Man in Black. There’s not much to them really, and the only thing I really want to point out from those teasers is the door in the first shot of Roland’s teaser. It’s a shot that isn’t in the full trailer, but it’s an image with a lot of meaning for a fan like me. I can’t read the nameplate at the top of the frame, but somewhere I saw it suggested it said ‘1919’, nineteen being an important number as well.

But let’s get into the real meat of the thing and talk the trailer itself. To do this as honestly and accurately as possible, I’m going to have to do a bit of a double-review. Basically, I’ll try and give my thoughts on it as a film separate from my thoughts as a fan. We’ll see how this goes. It’s hard, but I think we can get through this together.

My Thoughts on the Trailer as a Film 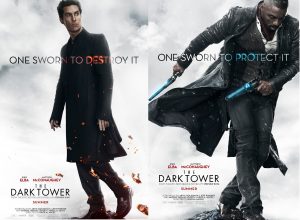 As far as this trailer goes, this provides an excellent introduction to the characters without giving away too much. We get a few lines about sort of who and what Roland is, and we see that contrasted with Jake, a kid from our own world. Intermingled with that is a few references to The Man In Black and the role he plays in all of this. I like that it gives enough for someone not familiar with the source material enough to have an understanding of who and what the characters are. There’s a good-vs-evil vibe spelled out quite clearly without needing to know anything else about the characters that makes it easy to put the characters in the right spots in your mind.

Visually, there’s some really gorgeous stuff going on. There’s some great shots of bleak, broken down worlds in various states of decay contrasted by very ordinary, very modern shots of our own world. We even get a couple of brief glimpses of the Tower itself. I didn’t notice any CG that looked really dodgy the way I did with the Pirates trailers and I thought the visuals overall were really good. There is a bit of a dark palette throughout but it doesn’t wash the whole thing out like in something like Man of Steel.

The acting we see here looks very impressive as well. Idris Elba is both world-weary and completely badass as the gunslinger, a gruff-type but doesn’t come off too much like a stereotype. Matthew McConaughey doesn’t do anything overtly evil in the trailer, or even seem that scary, but there’s a certain maniacal menace in him that he really sells. I thought his casting was brilliant from Day One, so I’m happy to see him really fit the role. I didn’t know anything about Tom Taylor before this, but he is sizing up to make a great Jake Chambers from what we see here, even if he looks older than his book counterpart.

Overall, this is a really good trailer and was much better than I hoped/feared it would be. Now hopefully the film itself lives up to that promise because it really looks like we might have something good on our hands here, even after all the rigmarole we went through to get to this point.

My Thoughts as a Fan

As a fan, I have a lot of thoughts. Now that I’ve done my best to be objective, let’s throw all that out the window and fan-out. Some of this is speculation, and I don’t think there would be any spoilers in this part, except maybe for the books? This part might also be less structured. You’ve been warned. Also, I will link anything that needs further explanation because I’m sure a lot of it will sound like gobbledygook.

-First off, I apologize for any fan-lamenting or any untoward thing I even thought about Idris Elba’s casting initially. Yes, he might not look like Roland, but I’ll be damned if he isn’t embodying the character beautifully. I got chills when he said ‘I do not aim with my hand….’ near the end and was swooning by the time he got to ‘I kill with my heart’. I really like the accent he’s using as well, it feels like it will fit Roland’s way of speaking really nicely. Awesome all around.

-Matthew McConaughey is perfect for The Man In Black. Moving on.

-I’m seeing elements from the first three books or so here. Hope they aren’t cramming too much in/leaving too much out with however they plan on doing the story. There's a reason I always thought this unfilmable due to how complicated it is so I wonder how much will be 'streamlined'. Then again, it's not an exact adaptation, so who knows.

-The pictures Jake has drawn at 0:34 are really interesting. The Tower, the field of roses (The Can’-Ka No Rey), what could be some kind of tunnel, some possible Slow Mutants, doors, eyes, what might be a reclining/sitting figure, maybe alluding to Susannah? Maybe I’m reading too much into these, and I really need a better look at them. Or maybe I just really want Eddie and Susannah, too. They're such great characters and I hope that if these films continue, they will be introduced, even though they'd have to do something different with the relationship between Susannah and Roland.

-So we are skipping the whole being pushed into traffic thing and going straight to the Dutch Hill Mansion as Jake’s entry to Mid-World? Does that eliminate the part with the Slow Mutants under the mountains, and thus the tagline for the whole film now either makes no sense or has to change in context? Although we do get a quick shot of the house demon at 1:50, which looked really cool. Without Eddie, we’re also losing a lot of context of the mansion itself, not to mention his and Susannah’s actions when Jake uses that door.

-Roland better follow up that ‘there are no gunslingers’ line with something like ‘I am the last’. Why does he seem so reluctant at times in this trailer? If there is one thing the character of Roland Deschain is most definitely not, it’s reluctant. Especially when it comes to the Tower. Don’t pull that crap, trailer.

-Okay, I know it looks like there’s a sky beam. I promise you, it shouldn’t be. There are Beams, but they aren’t the same as the ones that have become a standard trope in these kind of movies. At least they shouldn’t be. On that note, I want to see Shardik. Because I really wanna see a giant, cyborg bear on screen.

-The shot right before the Dutch Hill Mansion demon, ‘All Hail the Crimson King’ is written on the wall. Nice detail and glad to see it.

-At the end, in between watching that awesome shot Roland makes, I’m trying to place the location. They obviously are in some sort of settlement in Mid-World, but the only one in the first book is Tull, which is before Jake shows up. It ends badly for everyone in that town and I don’t know if they’ll go that route. No word yet on a rating but I doubt we’ll get the Battle of Tull as it went down in the books. I do wonder if/how certain things might be changed or toned down in the movie. Although Roland did plug that guy through the head at the end there, so maybe we won’t have to worry so much about that. There is some definitely weird stuff that happens, though, and I have a hard time believing that a lot of it will stay intact.

Alright, so there are my myriad thoughts on The Dark Tower trailer. I’m kind of cautiously optimistic now, to be perfectly honest. This might actually be really good. I hope. Please. What did you guys think? Will anyone else be joining Roland on his journey come August 4th? I know there were a lot of other trailers and things dropped this week, but this was kind of the big one I was waiting to talk about. In the next day or two I’ll also have a little write-up about our out-of-town trip and what we did there. So, until then, folks!