Make It Sew: The Costume Blog – Resistance is Harder Than It Looks!

One Star Trek: The Next Generation episode that would have a huge influence on the future of Star Trek was “Q Who?,” which marked the third appearance of the popular Q, played by John de Lancie. The episode also introduced Star Trek‘s nastiest villains — the Borg.

The Borg were intended to provide the series with a deadly, remorseless enemy that could not be reasoned with or defeated. Budget restraints kept the Borg from being depicted as insectoids as originally intended although the hive concept survived. Though they would appear in only five more episodes throughout the series, the Borg would make the jump to the big screen in Star Trek: First Contact.

Designing the very first ever Borg costumes presented TNG‘s resident costume designer Durinda Rice Wood with a challenge; these half machine, half human creatures were meant to look like nothing the viewer had ever seen before. “They said to me this is going to be the new bad guy of the universe. They gave us a little extra time. I think we got two weeks instead of one week!”

Wood’s original design was inspired  by H.R. Giger, known for the film Alien. Wood explains how she sought to integrate the Borg’s face with the rest of the body. “I wanted it to melt into the costume more but they wanted the face to be bright white. The thing is, we couldn’t do it. We just couldn’t do it in a week — we could have done it in three weeks. For something that the world has never seen before, you need time to develop it and invent it!”

One of the biggest factors that had prevented her from making the original design into a reality was that there was simply not enough time to cast new moulds for the various Borg parts. Fortunately, she found a company of ready made body part moulds, which featured in all her subsequent designs. At around the same time, she came up with the idea of running tubes from one part of the Borg costumes to another. This helped to make it clear that each Borg drone was unique.

Wood found that actually putting the finished costumes together was a far from simple matter. “The way they were first done, it was an ordeal! I had a basic jumpsuit made out of Spandex and I found that one side of Velcro would stick on to the fabric. We built it so that all the tubes and things could stick on to the suit and you’d get the guy in the suit and then you’d stick the parts on and it was a real organizational challenge!”

Michael Westmore, makeup supervisor, was asked to design the makeup for the new Borg aliens after the overall look was approved. “The idea was that the Borg were almost drained of their blood. I couldn’t give ten Borgs to ten makeup artists and have them turn out exactly alike. Everybody did something a little different in their touch so it became easier to literally line them up, have everybody glue their heads on, get their white faces on them and then I would take an airbrush and in one minute do all the shading on a Borg’s face. That way they all started to look alike.”

The original headpieces Westmore designed were relatively simple and featured the tubing Wood had designed for the costumes. Most drones had full helmets but when Patrick Stewart played Locutus, Westmore designed a smaller headpiece that featured a tiny laser found by Westmore’s son. They had no idea if the effect would work but the phone rang and it was Rick Berman. “Oh, my God, what a great effect!”

For Star Trek: First Contact, production designer Herman Zimmerman had hired artist Ricardo Delgado, who had previously worked on Star Trek: Deep Space Nine, to work on Borg concepts. Sadly, Delgado was unable to continue his work for the feature due to the demands of his work for Disney. The task of creating a look for the sinister and seductive Borg Queen then fell to Debra Everton who did all the costumes for First Contact, save for the Starfleet uniforms which were designed by Star Trek veteran Robert Blackman. Everton designed an entire new set of suits, which went on to be used on Star Trek: Voyager. 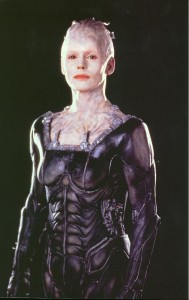 Makeup on the Borg again fell under the supervision of Michael Westmore, who looked forward to having the opportunity to refine the Borg’s overall look. For Westmore, that meant that what had taken two hours for a makeup artist to create a television Borg, now took five hours for a motion picture version. “Instead of having an entire helmet,” said Westmore, “now we have these individual pieces that are on the head, so you get this bald look. That way the pieces look like they’re clamped into the head individually.”

The Borg’s makeup grew more sophisticated as shooting advanced. “When we first see the Borg come into the nightclub,” says Westmore, refering to the holodeck scene, “they look great. But by the time you see them in the hive, the early ones are simplistic compared to the later ones.”

The movie also marks a first for the Borg. Previously, all Borg appeared to have been created from the bodies of human or humanlike entities. For the first time, Star Trek fans get to see Borg assimilated from Klingons, Vulcans and Bolians, among others. “One day for the fun of it, when I came in they had thrown some Bajoran noses on some Borg,” recalled Westmore, “so we had some Bajoran Borg. Then near the end, I asked Rick [Berman] about letting me do a Cardassian Borg. You have to look quick for him because he only worked two or three days.”

2 Responses to Make It Sew: The Costume Blog – Resistance is Harder Than It Looks!