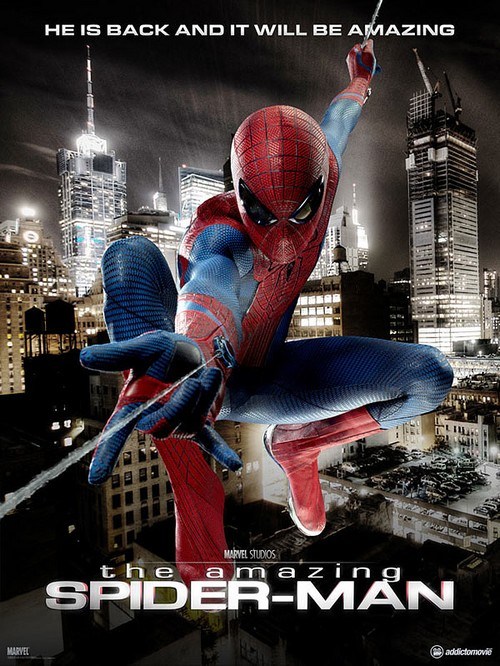 I saw "The Amazing Spider-Man" yesterday. Here's my One Sentence Review:

While TASM doesn't really give us anything "new", it does provide a fun moviegoing experience full of big-screen super heroics and spidey-sense-tingling excitement.

For more, see me after the jump. Warning, though, here there be spoilers!

The most common complaint you hear about "The Amazing Spider-Man" relies on the idea that it isn't anything new, that it's a redundant retelling of the same story we've already seen too many times before.

Which is both true and irrelevant.

Yes, this is essentially the same movie as the Tobey Maguire and Kirsten Dunst version ten years ago with a fresh coat of paint on it. So what? It's still fun, there are enough differences to keep it interesting, and we have a new villain to watch. If you're looking to escape the summer heat for a couple of hours of air conditioned popcorn-munching super heroic action, this is a good bet.

In general, I'd say it's on par with the original movie. The actors all turn in solid performances and the action is fun. My wife was clutching my arm at several points, which is always a bonus. I thought they did a great job recreating some of the dynamism and funky acrobatics that gave the early Steve Ditko comics so much life and fun, which was a step up from the previous iterations.

I felt like it dragged a little in parts, but maybe that's just because we're all so familiar with the basic outlines of the origin. I sort of wish someone else would take a page from the second "Hulk" movie, where they dispensed with the entire origin in the opening credits. Yes yes, crazy mutant spider bit, dead uncle, we get it, let's move on!

The Lizard sequences were done well, with the kind of lethal strength I wish we'd have gotten in the Godzilla movie. He was a truly scary opponent for Spidey, perfectly rendered on the big screen.

I found the plot to be a serviceable vehicle for delivering the action, although not anything I'll put down in my "Great Moments in Screenwriting" journal. For instance, there's (SPOILER ALERT!) a minor sub plot where the Lizard rolls canisters of mutagenic gas through crowds of cops, who we see transform into blue-clad lizard men. Then we don't ever see them again until the very end. Were they rampaging through the city causing chaos? Did they revel in their newfound strength and intelligence, proving that the Lizard was actually right? We don't know because we never go back to what was set up as being a fairly important development.

Of course the film was already over two hours long at that point so maybe there just wasn't time.

I liked Emma Stone as Gwen Stacy, her anime-like big eyes and slightly awkward mannerisms fit the role perfectly. And Andrew Garfield makes for a good Spider-Man, bringing an edge of fun and joy to the acrobatic parts of the role that Maguire missed. Yes, he's a little bit emo, but I think that's about how a modern-day take on Peter Parker should be.

So is it worth going to see? Definitely, even if you're not really going to get anything you didn't the first time around. But I like seeing what takes different creative folks have on a given super hero property. That's a long-standing tradition in comics and as long as the final product delivers the goods, I'm happy.

I'd say there aren't any high notes like the upside-down kiss, but on the other hand we don't have a moussed Peter Parker be-popping down Emo Avenue, either. In general I'd give this movie a solid B+.

If you've seen it already I'd love to hear your take in the comments as well.