Of fire nipples and Cyclothongs

If you're standing next to Emma Frost and you're the one people point at while shouting "That's a horrible costume!", then you, my friend, have achieved truly epic levels of sartorial psychopathy: 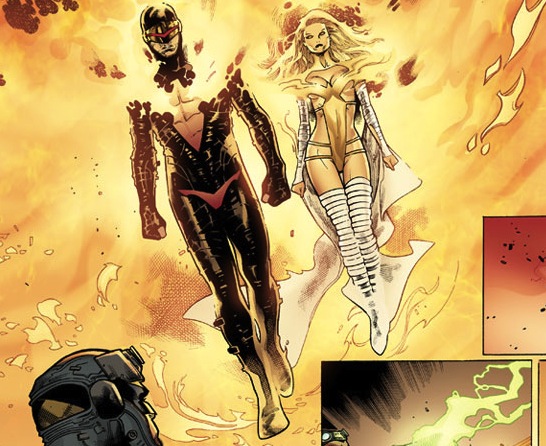 It's bad enough that Cyclops is wearing a red thong here (or "banana hammock" if you want to be technical about it), set against a black backdrop so it really pops. What's worse is that it's the same shape as his Cyclopean eye slit, making you think maybe they're both staring at you and waiting to blast you with a beam of some sort. Yuck.

His metal or leather or whatever the chic super-hero fabrique du jour is has a deep, plunging neckline cut into it in the shape of a phoenix, presumably because he's been taken over by the Phoenix Force. Or the NBA's Phoenix Suns, which would be much worse. Either way, it's good that the cutout exists because his nipples are on fire. That's gotta smart, but if you're not willing to take the pain then you're not really committed to your fashion choice.

So congratulations, Cyclops, you've managed to wear an outfit so bad I can't even mention Emma Frost, a sentence I'm pretty sure no one anywhere ever thought they would be able to write.

22 Responses to Of fire nipples and Cyclothongs