When last we left our intrepid Lone Wolf, we were deciding whether to apprehend a young thief, let him go, or ignore the whole sordid affair. Ultimately we chose to report the little rascal: 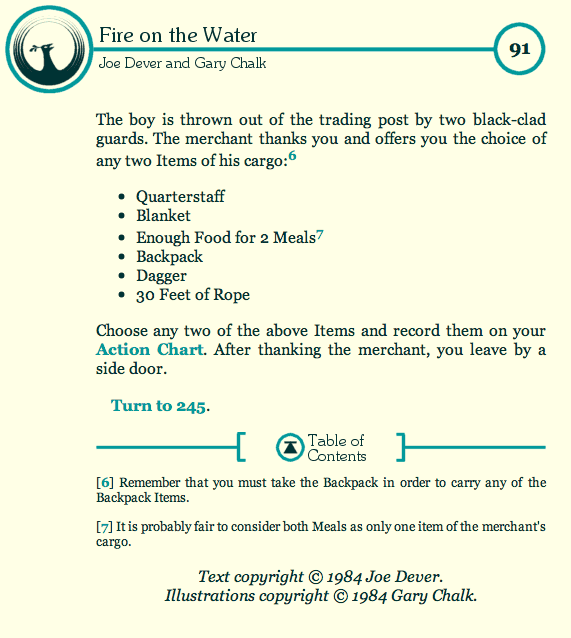 I imagine later we'll find his severely beaten corpse in a side alley, with black-clad guard bootprints leading back to the store. Civic virtue FTW!

But hey, screw that kid, we get free stuff! We do not currently own a backpack, so if we choose anything but the Dagger, we'll have to also choose the Backpack so we have somewhere to put it. I mean, if you see some guy walking down the street holding a blankie and two bags of Big Macs, I think it's likely you would report that guy to the cops.

Also, we already have a dagger and a mace. If we choose the dagger or the quarterstaff, therefore, we'll have to dump one of those two weapons since you can only have two at one time. It would be nice if we could tie our existing dagger to the end of the quarterstaff with some of the rope, making our own Spear (which we have the Weaponskill for), but alas, this isn't quite that interactive.

For the Meals, keep in mind we can't use our Hunting Discipline since we're in civilized areas. I don't know when (or if) that restriction will be lifted, but for now, we're going hungry.

So the way I see it, we have no real choice except to pick the Backpack and one other item. However, since I know how much we gamers like to be ornery, I've left the poll open to TWO selections per person. Whichever two get the most votes is what we'll pick.

Make your case for what we should select in the comments. I love gearing up! Remember, choose two of the below options.

28 Responses to Time to shop!