If only wraiths were invisible …

If you ever get down about your inability to create a cool looking character, just remember that people at DC got paid a lot of money to assemble THIS look: 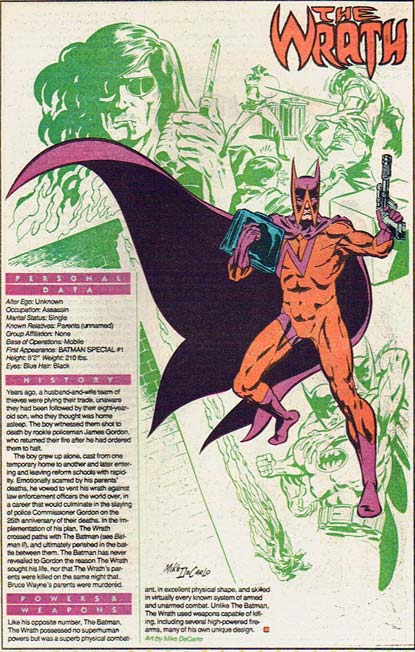 First of all, if you're an intrepid adventurer for good or evil and you get the idea to dress up in a costume to hit the streets, let me offer you a quick word of warning from the dizzying heights of my years of super-costume experience:

Don't make your mask out of your initials.

Sadly, no one was there to help Wraith with that little tidbit, so he's forced to wear a giant purple "W" as a helmet. Since this character predates the ascension of George W. Bush to America's Presidency, we can safely assume that rather than some sort of political statement this is, instead, just a horrible fashion faux-pas. "Oh no," I hear you crying, "I am sure that was just an accident, that's not really supposed to be a W!" Riddle me this, then, O Defender of the Sartorially Challenged: why then does he have another W woven in similar clumsy style onto his top?

Not content with one assault on the senses, though, Wraith has gone a step further by making the offending piece of headwear out of purple and orange fabric.

It's bad enough the thing looks like Batman's cowl is getting eaten by by an X-Wing Fighter without forcing it to deal with those two colors, each horrible in its own right and each made even worse by its proximity to the other. Throw in the "Cape With Only Three Notches" that looks like a leftover from the "You Too Can Make a Batman Cape" seminar and we have yet another in the long line of nemeses who tried to ape the Darknight Detective's fashion sense only to get an epic fail. I think the slightly-too-high-to-be-comfortable purple leg strip really seals the deal. It's like someone wanted a Rob Liefeld leg pouch but couldn't bring himself to actually do it. Maybe they blew their "Copycat" load ripping off Bruce's tailor and just couldn't get over the hump, but whatever the reason, we should all be thankful.

I also love how, in this illustration, he apparently has no idea how to carry a briefcase. "Hmm, I've got this bag of loot, but NOW what do I do with it?!! Curse these modern carryalls and their confusing handlery! If only my W Mask wasn't eating my face I could figure this out!"

I think we'd all be better off if this garter-wearing pinata-colored letter-masked no-briefcase-carrying buffoon would make like a real Wraith and just fade away ...

17 Responses to If only wraiths were invisible …