When it comes to fictional technology, you're better off if you dress an idea up in a cool-sounding name and leave out the details than if you explain the daylights out of it. You need look no further than the unmitigated abortion that was "Star Wars Episode I", when the "Force" went from awesome-because-undefined to staggeringly-boring-mitochlorians to see what I'm talking about.

Usually the same principle works when applied to super-hero comics. The artist just slaps some doohickey onto a costume because it looks neat and is fun to draw, and it works. Then, years later some pencil-necked geek from the Corporate Hackery Redesign Department feels obligated to explain why Black Bolt has a tuning fork on his head when, let's be honest, Jack Kirby was just feeling frisky the day he drew the outfit the first time.

But occasionally an artist forgets this less-is-more approach and we get something like this panel here, from the "!mpact W!nter Spec!al" number 1 (and yes, those exclamation points are part of the actual title): 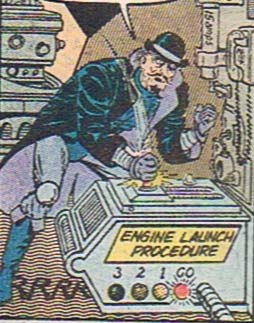 First, the sinister villain operating the controls frankly looks ridiculous. I can't ever remember thinking that a bowler hat, long leather trenchcoat, and knee pads might look good, particularly when said coat has a purple lining.

But ignoring the fashion faux-pas, let's take a look at the machine our evil genius has assembled. The action takes place in his fancy new spaceship, built so he could travel to other planets and take them over. He doesn't know where any of these planets are, he doesn't know if there are people on them even if he were to find them, and he doesn't have any way to travel fast enough to get there before he's long-dead, but nothing can stand in the way of a Big Idea coupled with bad facial hair.

Regardless, he's chosen to make the craft launch via a single large red button which, apparently, you must pound with both fists to activate. (Or maybe that's another button there under his left fist, and he has to smash them in a pattern like that old "Track and Field" arcade game. mash-mash-mash-mash-mash-JUMP!!) Then, just in case he forgot that the big red button means "Go", he's crafted a large yellow sign saying "Engine Launch Procedure". Hey man, I feel you; it's launch time, you're stressed, the last thing you want to do is to lose track of the machine that starts the ship.

But what I think I like the most is the actual launch procedure in question, which consists of big lights counting down from 3-2-1-GO. I'm not sure what all he had to cram into the electric-shaver-grill-inspired launch machine there, because that's about as simple a process as I can imagine. Oh sure, maybe he could dumb it down for today's audiences to just 2-1-GO, or even a simple GO!, but this guy clearly has standards.

He's certainly got a consistent design ethos, however. Take a look at one of the other parts of the ship we see a few panels later: 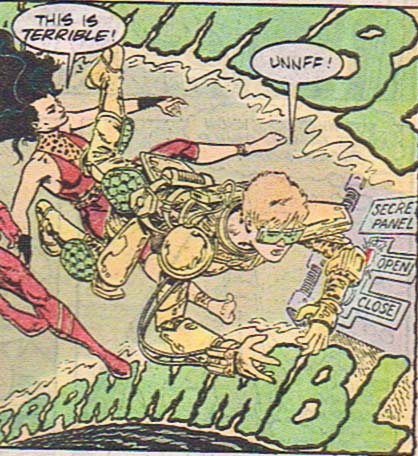 The Jaguar is right, that IS terrible; I'm no CIA expert or anything, but I'm pretty sure that part of keeping "secret" doors secret is to not put up a giant panel labeled "Secret Door".